For King & Kaiser: Both Sides of the Wire – Date TBC

An all inclusive 5 day battlefield holiday, examining the First World War from both the Allied and German perspectives.

“For King & Kaiser” – The Great War from both sides

Date to be confirmed

This Tour starts in

From £1074 Per Person –  All Inclusive
(Excluding Drinks)

For King & Kaiser – The Great War from Both Sides

This unique tour, designed and guided by our German military historian Robin Schäfer and British re-enactor and historical interpreter David Allton, takes a look at the (often) shared frontline experience of the British and German soldier of the Great War. Together, Rob and David will let you have a closer look at the lives of the men in the trenches, concluding that those serving in khaki and in field grey were not that far apart, neither geographically, physically, nor emotionally. Both sides went to war with high ideals while experiencing horror and misery, comradeship and Kameradschaft.This tour draws extensively from Rob’s personal collection of letters and diaries of German soldiers of the Great War, giving you a unique insight into the mindset and thoughts of the Kaiser’s men while at the same time dispelling a lot of the myths relating to the German Army that still persist today. 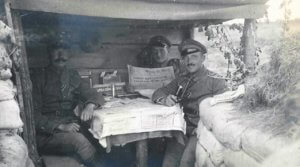 Arrival from the UK 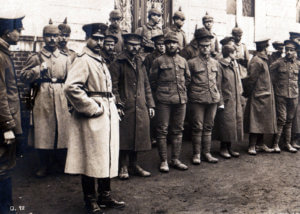 After breakfast we will head out into the rich, green fields of Flanders. We’ll begin by visiting the German cemetery of Langemark, where we will have a closer look at its history and some of the design elements common to all German cemeteries, before turning our attention to the story of some of the individuals buried there. After that we will make our way to Messines, where you will learn about the German capture and the British defence of the city in 1914 before we have a closer look at myth and reality of the Christmas Truce. After stopping at Gheluvelt to look at the Charge of the Worcesters we will head to Hooge Crater Cafe and Museum for a relaxing lunch break. On finishing lunch we will take a look at the Battle of Hooge that took place on 30 July 1915 and saw one of the first major employments of the flamethrower, one of the most feared weapons introduced during World War I. At Bayernwald we will visit a restored German trench system and a surviving mine shaft before taking a closer look at the bloody fighting for the infamous Höhe 60/Hill 60. Finally, before heading back to our Hotel in Ypres, we will have a look at the unique and tragic story of a German officer buried in a British cemetery. 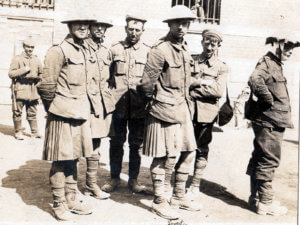 On this day we will head out into the beautiful and open landscape of the Somme. Arriving near Montauban we will look at the actions fought there on 1 July 1916 and will tell you the story of a Bavarian infantryman who was decorated for a heroic ‘last stand’ action against British and French attackers. From there we will make our way to Hawthorn Ridge, west of the village of Beaumont-Hamel. The attack on the German fortifications there on 1 July by part of the 29 Division became a costly failure. We will look at the reasons for that failure and take a close look at the German defenders of the 119th Reserve Infantry Regiment from Württemberg. After our lunch break we head towards the iconic and stunning Thiepval Memorial for the missing of the Somme discussing again the repeated British attempts to wrest the village from German possession while at the same time looking at the German defenders and their defence of the cornerstone of Thiepval.
At La Sars we will have a look at a forgotten German regimental memorial. From there a short trip will take us to Delville Wood or ‘Devil’s Wood’ as it was also known, taking a close look at the fierce fighting there in July 1916 while our final stop will be a German cemetery lost in time. 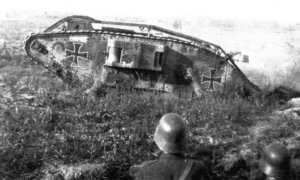 We begin the day at Louverval, where we will visit to the missing of The Battle of Cambrai. Heading to Flesquières, the site of fierce fighting during The Battle of Cambrai and place where a large number of tanks were destroyed we will look at a number of tank crews which are buried in Flesquières cemetery, while telling you about the German perspective of the Battle of Cambrai, German adaptation to the tank threat and the strategies and tactics developed by the Germans to counter it. We will then give you ample time to explore the newly opened Cambrai Tank Museum with its impressive center piece – the wreck of D51 ‘Deborah’. After lunch we will head to Bourlon Wood taking you to the memorial to the missing of 1918. We then move on to the village of Bourlon and Bourlon Wood, talking you through the the later stages of The Battle of Cambrai in 1917 and the highly successful German counter offensive which implemented many new and innovative strategies which would become the norm in the battles of the final year of the war. 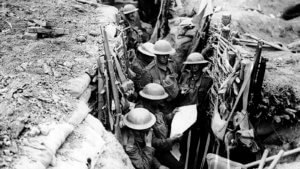 Travelling back to the UK.

Rob is a full-time German military historian, public speaker and published author who has made his specialist study the life of the German soldier in wartime. He has acted as a historical consultant for television companies and is a regular contributor to a number of British and German specialist military history magazines. He acted as historical consultant for the Department of Media, Culture and Sports and the First World War Centenary Battlefield Tours Programme of the UCL Institute of Education and Equity. He has also worked as an historical advisor and contributor for a number of British television programmes including the BBC’s ‘Great War War Interviews’, ‘Voices 16 – Somme’ and Channel 4’s ‘Battle of Britain: The Last of the Few’ and Channel 4’s ‘Last Heroes of the Somme’. His latest book ‘Fritz and Tommy: Across the Barbed Wire’ written in conjunction with Professor Peter Doyle was published by the History Press. 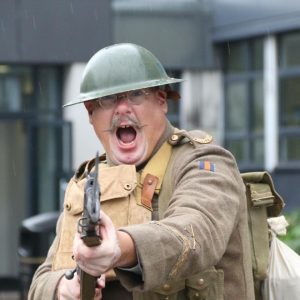 David is an experienced teacher, re-enactor, historical interpreter and tour guide, with a lifelong interest in the Great War. Since setting up Frontline Living History five years ago, he has travelled the length and breadth of the UK giving talks, displays, presentations and workshops about the First World War to audiences of all ages, specialising in working with school groups. He is particularly interested in the British soldier’s experience of the war, and in the organisation, development and impact of British battlefield medicine between 1914-1918.

Included in the For King & Kaiser tour package:

The full board accommodation provided will be of a 3-star standard or higher.
Breakfast and dinner will be taken in the hotel, while the midday meal will consist of a quality packed lunch taken at a suitably chosen location along the day’s route.